I scored the company and media production logo “Ident” for Games Workshop’s massive WARHAMMER gaming and science fiction brand. Games Workshop, is a British manufacturer of miniature wargames, based in Nottingham, England. They are a billion dollar market valued company, as well as a top performing member of the FTSE250 index. As a global science fiction and fantasy brand, they have millions of dedicated, passionate fans. I’m one of them.

In fact, I’ve been a lifelong fan all things WARHAMMER: their games, their miniatures, their novels, and their incredible world building.  Over the years, I’ve become friends with many of the creative geniuses at Games Workshop: sculptors, painters, designers, authors. So it was an incredible honor when Games Workshop asked me to score their new company logo, to be the SOUND of their public identity.

This was a massive undertaking, with creative and technical challenges.  On the creative side, there was the daunting task of tackling the question of ‘What Is Warhammer?’, as well as the long history of the brand, and trying to distil that into a clear, concise essence. A single musical gesture of just 16 seconds that encapsulates all of it.  40 years of Games Workshop’s intellectual property, products, stories, characters and world into one musical moment.

A world as MASSIVE as Warhammer demanded an equally massive musical approach.  I recorded a 90 piece orchestra and choir at the George Martin’s legendary AIR Studios in London.  It turned out to be the largest percussion recording in all of London in 2019!   dozens of massive Japanese Taiko drums, African Djuns, timpani, gongs, and anvil and more…

It was a lot of coordination and planning. When we went to edit and mix this, it was insanely large. 950 unique tracks in surround sound for a full orchestra. It’s amazing to hear Warhammer expressed in this powerful way.

“It’s very stirring,” says Jes Goodwin, the godfather of the world-famous Space Marines and one of Warhammer’s longest-serving and most highly regarded miniatures designers. In fact, Jes had a hand in the project, giving direction and signoff to the 3D Space Marine and Stormcast Eternal renders created by M2, but this was the first time that he’d seen the full ident. The music had barely died down, but already he was considering what he’d seen. We played the video again.

“There’s a dissonance to Warhammer that you see played out in this,” Jes adds, as he watches it through for a second time. “In the Space Marines, you have high-tech armour and a brutal weapon, both quintessentially futuristic, juxtaposing with the medieval influences and clashing cultures present in the music. Jonathan loves our worlds, and he’s managed to bring in elements that are really subtle, and really ‘get’ what Warhammer is all about.” 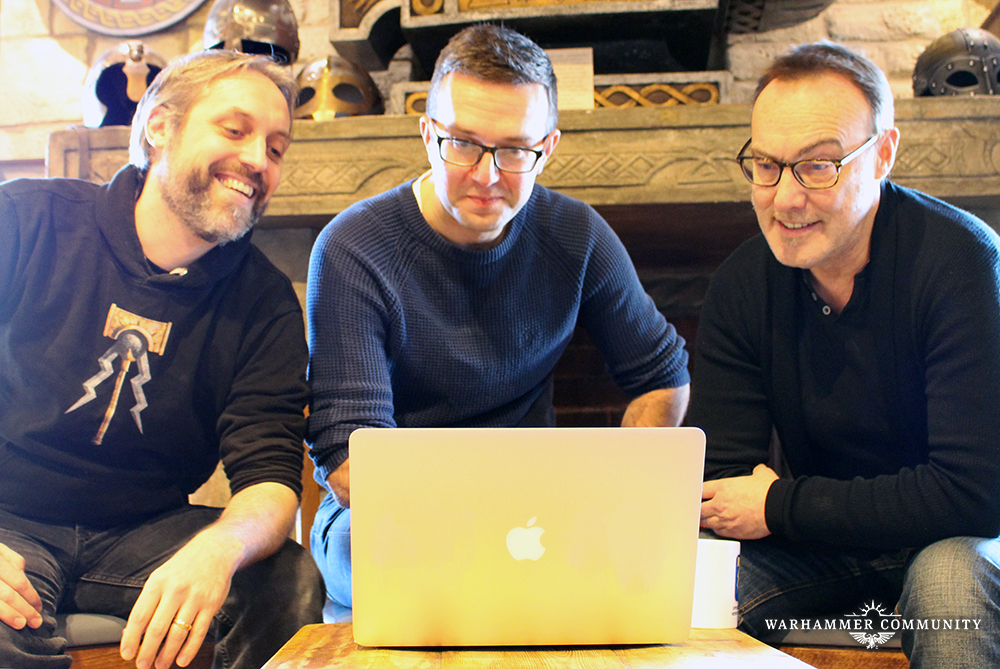 “Goosebumps,” adds Jervis Johnson, a veteran of the Warhammer Studio and originator of many of Warhammer’s best-loved rules and lore. “I was walking past the concert hall in town recently, and there was a science fiction and fantasy concert going on, where they play all the theme tunes from the films. I remember thinking at the time that it’s not quite right really, it felt like there was something missing because there was no Warhammer. Now, this? This feels like the start of something.”

“It’s got a great sense of gravitas and presence, hasn’t it?” asks renowned Warhammer writer, Phil Kelly. The question is purely rhetorical, but as the lead background writer for Warhammer Age of Sigmar (and a talented drummer in his own right), Phil has a keen interest. “It had to be classical music, with that sense of antiquity. The music has a sense of legend and history to it. I like how both Warhammer 40,000 and Warhammer Age of Sigmar are represented. 40K is, by its very nature, grim and dark… while Age of Sigmar has that air of hopefulness and that majestic swelling that completes the movement.”

“It’s an exciting time,” says Pete Foley, one of the heads of the Warhammer Studio. “This ident heralds something very exciting when you think about it. It’s thrilling that we even need it – that there will one-day soon be enough high-quality media content to warrant this. As with anything that draws on a well-known intellectual property, you want to retain it’s essential nature, what makes Warhammer… well, Warhammer. The gritty, beautifully rendered characters, the choice of music, the fact it’s performed in the minor key – these all help the portrayal retain its dark fantasy aspect.”